American trucks are really the pinnacle of a heavy-duty, workman’s best friend.  Between the Silverado from Chevy, F-150 from Ford and the Ram from Dodge, you’d be hard pressed to find a more legendary trio.  I know that the Japanese choices are getting better like the Tacoma, but they’re just not quite there yet.

Years after year, quarter after quarter, the American trucks fight for more and more market share to beat out the competition.  Even though the contest is bitter, that means that the trucks themselves are getting better and better for the consumer.

In the next couple years, we should see these brands redesigning their trucks to spur on more sales.

When specifically talking about the Ram, we’re talking about a model that has been on sale for a good number of years now.  FCA (who owns Dodge/Ram) plan on redesigning the 2018 Ram 2500.  As for the 1500, the smaller truck will actually be overlapping in production over the redesigned model.  Interesting stuff, but FCA is known to do this sometimes.

FCA ran the new style Chrysler Pacifica and the Grand Caravan over each other and sold them at the same time.  I’m not sure why it makes sense, but FCA seems to do this quite a bit.

Dodge/Ram will continue the usage of cold, hard steel over the industry that keeps pushing for aluminum bodies and frames for trucks.  Apparently, it will allow the 2018 Ram 2500 to have more designs in the body work, since aluminum is harder to manipulate and keep sturdy.

Like I said in the introduction, the 2018 Ram 2500 will feature more of a evolutionary design rather than a full redesign.

The headlights will be more integrated into the grille as we see in many other models these days, and the nose will stay firm and assertive up front.  Along with the large grille, the hood will actually stand taller over the grille than the previous generation.

Ram also looks like they will be revisiting one of the most popular and recognizable features that has ever been on a Ram truck, and that is a cross-hair grille pattern.  Apparently, the 2018 Ram 2500 will sport that trademark again.

With the larger hood, there is more room for air to vent out and it looks more aggressive than before.  Perfect for a truck named “The Ram”.

The headlights have a more angled-down look to them, and are surrounded by LED signatures.  If we can draw any quick conclusions from the spy shots and illustrations, the 2018 Ram 2500 will be a mean looking truck.

As for the rear, we could see a new tail light design as well.  If the spy shot is any indication, the new tail lights look a lot like what we see on the current Silverado, and I do hope that that changes.

Overall, the new exterior for the 2018 Ram 2500 will be fitted with new muscles and harsher lines.  Which is good for a truck.

Lastly, there is speculation that the truck will be a bit longer across the whole model range, which again is good. 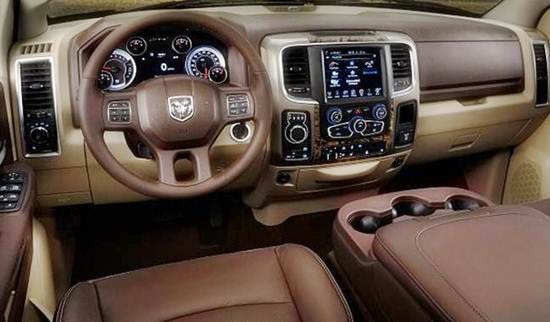 From a broad angle, there is a nice navigation screen in the middle, Chrysler controls for the air conditioning and drive controls, and a good overall layout.

I never liked the turn-dial gear selector that we find in the 2500’s little brother, the 1500.  It always looks so un-cool and undramatic.  Which may be a silly thing to complain about, but if it’s not broken, don’t fix it.

I always liked the transmission selector that was mounted to the steering column, which effectively does the same thing the turn dial thing does.  Which is clear up space in the center console for other things that construction workers need room for.

There may be more of a redesign in the interior for the 2018 Ram 2500.  We really don’t know at this point, but things look promising so far.  From spy shots there aren’t really a lot of changes that we can see right away.

The capabilities of a truck is the true make or break factor when people go to buy one.  It can look as mean or as beautiful as ever, but if it cannot operate in it’s purpose, there’s little point in owning it.

While the main construction of the 2018 Ram 2500 will be steel, there will be the aid of lighter materials elsewhere to help the towing capacity and fuel economy of the truck.

Dodge is hard at work with engine options. We won’t see a 3.6 L V6, as that is reserved for lower level 1500 editions.  We will see a larger V8 and a turbo diesel to cover its tracks.

While we don’t really know much about the new 2500 Ram, we can predict some from the current model and its brothers.

The redesign and update of the 2500 should mean that other competitors are on their way to do the same.  Look for a release date for the 2018 Ram 2500 in late 2017 and a starting price yet to be determined.