I’m coining the term “Electric Avenue” to refer to all of the new electric cars that are spawning out of no where in the next coming years.  I think I might trademark it actually…

Anyway, There’s a massive influx of veteran companies and hopefuls alike that are flocking to the cutting edge technology of creating an electric car.  Whatever the cars purpose, it seems like everyone from Aston Martin to Apple is making something to fill this void of green machines.

I’ll admit a small personal bias every time I write about electric cars, and that is the fact that I don’t really like them.  I like engines powered by explosions better personally.  But that in no way means I’ll rip on them.

Anyway, this is all great for manufactures who want to cash in on the craze for electric cars.  They push the boundaries as far as technology and transportation, and you have to respect that.  Some incredible feats there.

A kind of cool new wave has come too, we’re seeing companies we’ve never heard of like Faraday Future and Lucid Motors and Rimac coming in and creating electric cars that are just ridiculous in every way.  Putting conventional makes on their heels.  As competition should.

So today we’re going to discuss a big boy that I’m sure a number of you have heard of.  The Porsche Mission E.

The Mission E is from an outside perspective a crazy Porsche Panamera looking thing.  There’s a lot that goes into this project, and Porsche promises a big return.

Clearly there isn’t much info out there for the Porsche Mission E concept car.  But, that doesn’t mean we don’t know much.

The concept as a whole is very ambitious, and time is crunching on Porsche to develop it. Jaguar is already in the final phases of developing and testing the I-Pace SUV to compete and now Aston Martin is joining in the race.

The Mission E is a lovely looking thing no doubt, but these sorts of concepts always keep my eyes squinted.  Most of the time (unfortunately) these ambitious concepts never develop into the real thing.

Porsche, as Aston and Jaguar, are heavily concerned with retaining the driving pleasure and dynamics.

In a car that doesn’t have the soul of a classic ICE, driving dynamics and that whole lot are going to be hard to preserve.  I’m excited to see what Porsche can come up with then, because I would love to be blown away by an electric car.  Who wouldn’t?

Porsche has had a lot of experience with electric and hybrid technology, especially with the insane Porsche 918 Spyder from a number of years ago. 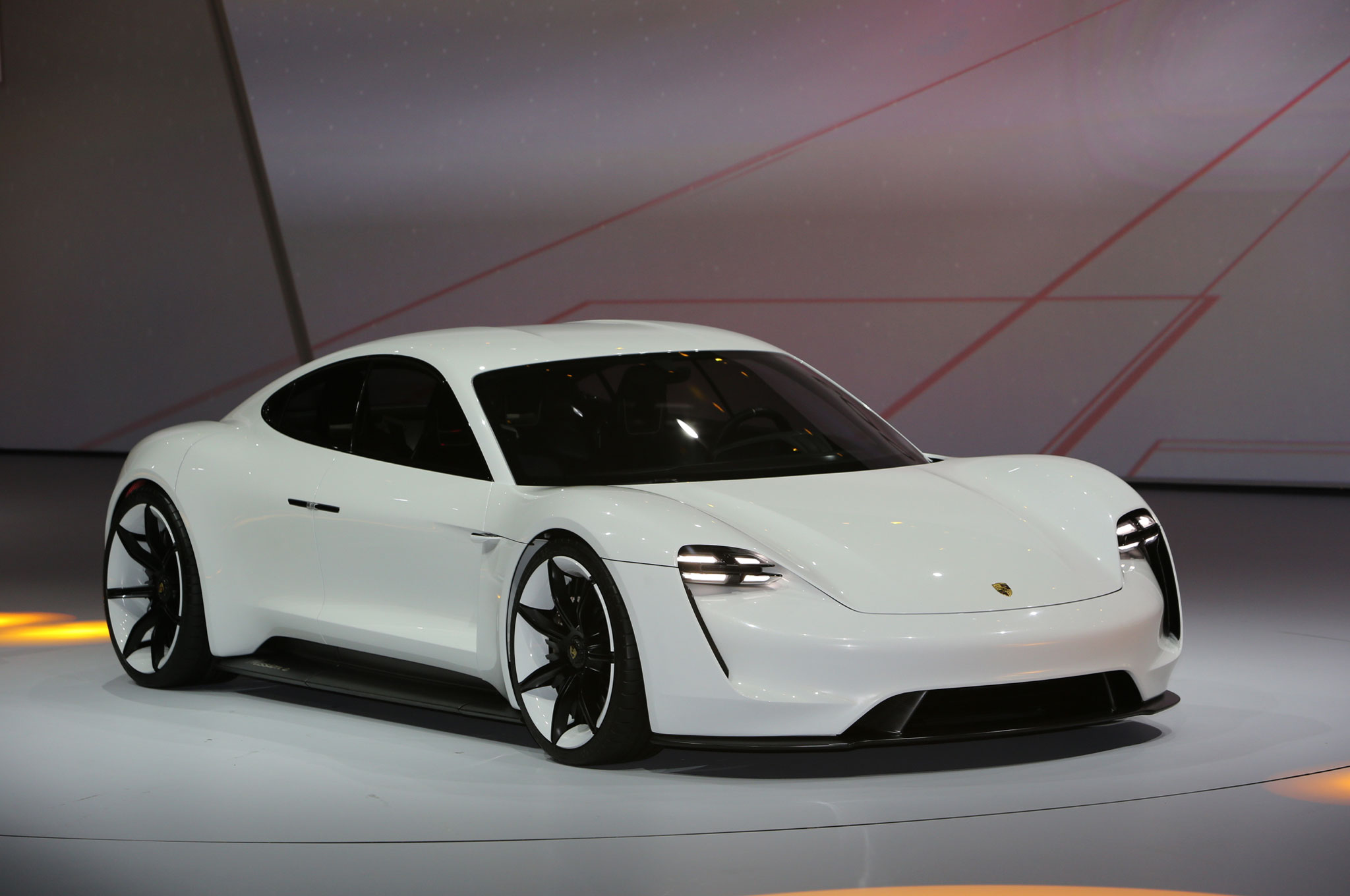 Porsche’s exterior styling for most (if not all) of their cars is pretty reclusive.  Their cars aren’t invisible by any means, but for sports cars and luxury cruisers, Porsche’s cars can fly under the radar to the untrained eye.

Even the amazing Porsche 918 Spyder isn’t the most shouty looking thing in the world.  The front end of the 918 is relatively normal looking, which is totally fine since the company has that sort of history.  Plus the 918 is very pretty.

Porsche doesn’t need a ton of crazy design cues to look great, as we’ve seen from history.  The prettiest cars tend to be the most reserved.

Porsche really took this to an extreme with the Porsche Mission E.  The car doesn’t feature hardly any distinctive features, and that’s partially due to its nature.

Electric cars don’t need as much cooling technology or ventilation on the body to cool down the engine that it doesn’t have.  So that means there is no need for big air ducts or intakes everywhere.  Which in most cases means styling can be scaled back a bit.

The Porsche Mission E’s front end is very plain.  But, it looks great.  The quad head lamp assembly makes the thing look super cool, and the lines that open up to the air flow vents for the wheels are super symmetrical on each side.

The openings between the two sections of headlights on each side actually house the radars and such for the driver assistance systems. It is largely designed by science.

There really isn’t much to talk about other than that, but I love it.  It looks like a spaceship and would no doubt stand out in traffic.

Form the side there is much more to stare at.  While the general design is plain, the shape of the thing is beautiful.  The ultra sleek roof line is pretty typical Porsche, and the whole thing stands just 1.3 Meters tall.

Porsche’s Mission E has wide hips and a very plainly shaped rear end.  You can also see the car will have suicide doors on the back for rear-seat passengers.  A cool little addition.

The Mission E also doesn’t feature side mirrors, because those are so 20th century.

As we see with the Aston Martin Valkyrie coming out soon, Mission E replaces these pieces of glass with cameras on the side of the windshield (according to Porsche).

I’ve been waiting for this kind of thing to happen, I just hope that Porsche and Aston are about to really incorporate this technology and have it be as easy to access as the standard side mirrors are.  I like the ambition, but if you can’t make the side mirror as simple as it already is and add cameras, there’s no point.

And my favorite part, the active aerodynamic wing comes out of the back.  The thing looks awesome.

Overall, the design of the Porsche Mission E concept is very impressive.  I do hope that it stays largely the same when it comes out, but who knows since concept cars never really materialize properly.

Porsche interiors have the same kind of issue (maybe the wrong word) as the outsides of their cars.  They all look the same.

It seems like the German’s really like to keep the same interior across every car they make (save for a couple of manufactures) but Porsche really takes things to the extreme.

Between the Cayman, Boxster and 911, the interiors in Porsche’s cars are legit the same.  No differentiation (that’s a word).

While it isn’t really a big deal in performance or sports cars, I do like my interiors.  Could be personal.  But I’ll give Porsche a pass because the main function of a sports car is the driving experience, not the interior wood paneling.

There are four full seats inside the Mission E, which means no middle seat.  The electric drive component also means that there is no transmission tunnel in the middle.  That does open up space, but that would be best for a situation where there is a middle seat.  In this case there isn’t.

The seats do look great to the eye, but I can’t help but feel they look uncomfortable.  The bolstering looks massive and the depth is far.  Might be hard to get in and out.  But what do I know.

As with the trend of Porsche’s these days, they feature a new long tunnel that does from the base of the front seats to the dashboard.  I think it looks awesome.

This is where Porsche sets their infotainment and other controls.  Very cool.  You can see it in practice in the Porsche 918 as well.

The steering wheel seems to have some different stalks on it where you would usually find casually mounted buttons for various functions.  I have no idea what they do, but it looks like a proper replacement for buttons.

Just before the instrument cluster, there is what looks like a camera pointing directly at your face.

If that circle with a lens is actually a camera watching the driver, that’s kind of weird.  I’m not the conspiracy theory type, but I/m not sure everyone will like a camera staring at them while they drive.  It’s probably for good reason though.

There also seems to be a lower dashboard for the passenger to see whats going on with the car digitally, kind of like the system in modern Ferrari’s.  I think it’s great.  Porsche incorporated the drive mode, temperature (presumably the exterior temp), and navigation.

The main instrument cluster looks to be fully digital, which just make sense in a full electric car like the Porsche Mission E anyways.

It looks like the shifter is a very little assembly on the center tunnel that I touched on earlier.  The shifter is a little knob that controls park, neutral, reverse and drive.

More on the instrument cluster, you get the speed in a large central display as well as the power being used.

Secondary displays feature navigation directions, phone settings and calls, your efficiency, time and temperature.  I like this new design, since the standard instrument lay out for Porsche’s include all kinds of information for gasoline engines like fuel level, a tach, oil temp and more.  The new Mission E displays relevant information in a classic Porsche fashion, and I adore it. 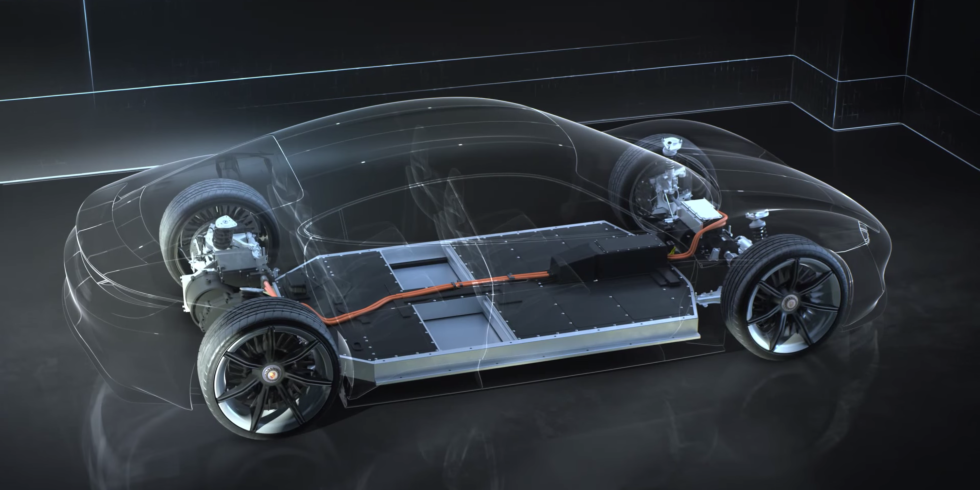 Things are relatively vague when it comes to the performance of the upcoming car.  That’s to be expected, though.

As of right now Porsche’s aim is to get the zero to sixty time of the Mission E below 3.5 seconds.  That seems plenty fast and very doable.  200 kilometers per hour will take less than 12 seconds.

Porsche also looks to have horsepower numbers above or around 600 horsepower and a range of 300 miles.  80% charge of the Mission E’s 800 volt battery pack is aimed to be achieved in 15 minutes as well.

It will be interesting how things play out for Porsche with the Mission E.

I’m not a fan of electric cars in most cases, but I do like the Porsche Mission E.  It looks great and hopefully won’t have the personality of a refrigerator, like most electric cars.

Porsche hasn’t announced a release date for the Porsche Mission E, but we can look for something around 2019 most likely.