Volkswagen is an absolute automotive titan.  They own the likes of Bugatti, Lamborghini and more obviously, Audi.

What that means is that all the manufactures listed above (even Bugatti) share some technology which depending on how you want to spin it, can be a good or bad thing.

In most cases it’s good, since Volkswagen is very good with technology and making the experience great.  Like the navigation integrated into the instrument cluster or the driving ergonomics.

Other than that, we see a ton of Volkswagen cars that are extremely similar to cars of their other makes.  Such as Audi.

In Audi’s case, there are a ton of similarities both styling and even technology wise.

Which again is good and bad.  Volkswagen customers get the lovely technology you’d find in an otherwise much more expensive Audi.  It can be a bad thing as Audi drivers get things you can get on a Volkswagen.  Not a huge deal, but annoying to some.

With both cars though, you get sublime characteristics and great developments across multiple platforms.  One of them is very new, and it comes in the likes of the Volkswagen Arteon.

The most Audi Volkswagen that isn’t actually an Audi but could be.

The new Arteon is a large sedan/coupe thing.  This kind of car seems to be popular with the German’s these days.

Volkswagen is replacing the CC with the Arteon in the coming years, and carries some similarities with it.

Just like the previous car which was largely Volkswagen big luxury sedan, the Arteon aims to be the top of the pack from Volkswagen as far as their cars go.

The Arteon then, will replace the CC.  Obviously, there isn’t much we know about the car other than that.

Volkswagen plans on revealing the car in 2018 as a 2019 model which is completely acceptable.  This car will accelerate Volkswagen’s return to relevance, which is very nice.

Volkswagen offers some great cars, but they are kind of on the plain side of things.  With the CC, you can get a decently premium sedan from a manufacture mostly for the everyday person.  Just like the GTi and Golf R, the CC added some flare to the line up.

That’s where the Arteon will come in.  The 2018 Volkswagen Arteon will be the new nice VW that comes dangerously close to being an Audi.  You’ll notice me say that a lot in this article.

We’re expecting the Volkswagen Arteon to start around $37,000 as a base MSRP.  That really isn’t bad at all, and really puts the car in running with the best of the best.  We see similar price points from Alfa Romeo’s Giulia, BMW 3 Series (for now), Audi A4 and the like.

The car is a very nice looking one.  Looks are subjective obviously, but I think the 2018 Volkswagen Arteon is a great looking replacement for the CC.

Volkswagen’s are never really striking cars.  I’m guessing the VW group saves the daring designs and ambition for the other brands in its umbrella like Lamborghini and Porsche.

That being said, Volkswagen’s halo car or premium offering does need to do something different, as we see with a lot of halo cars.

The new Volkswagen Arteon is a much more striking vehicle than we’ve seen from others from the lineup.

From the front, the Volkswagen Arteon has a lot going on.  Even so, you can get a pretty good visual direction of what the German mind was thinking as they designed the Arteon.

The head lights have a distinctive “U” shape to them as they enter the upper grille, which is almost indistinguishable from the lower grille.  Very horizontal design.

On the lower end of the front bumper, the Arteon features large air ducts that resemble a feature we see on a lot of other Volkswagen models.  But, they’re larger here and more prominent.

From the side of the car, things are sloped just like the CC that the 2018 Volkswagen Arteon  is replacing.  There’s a massive influx of these coupe roof lines on four door sedans, and the Arteon fits the bill perfectly. 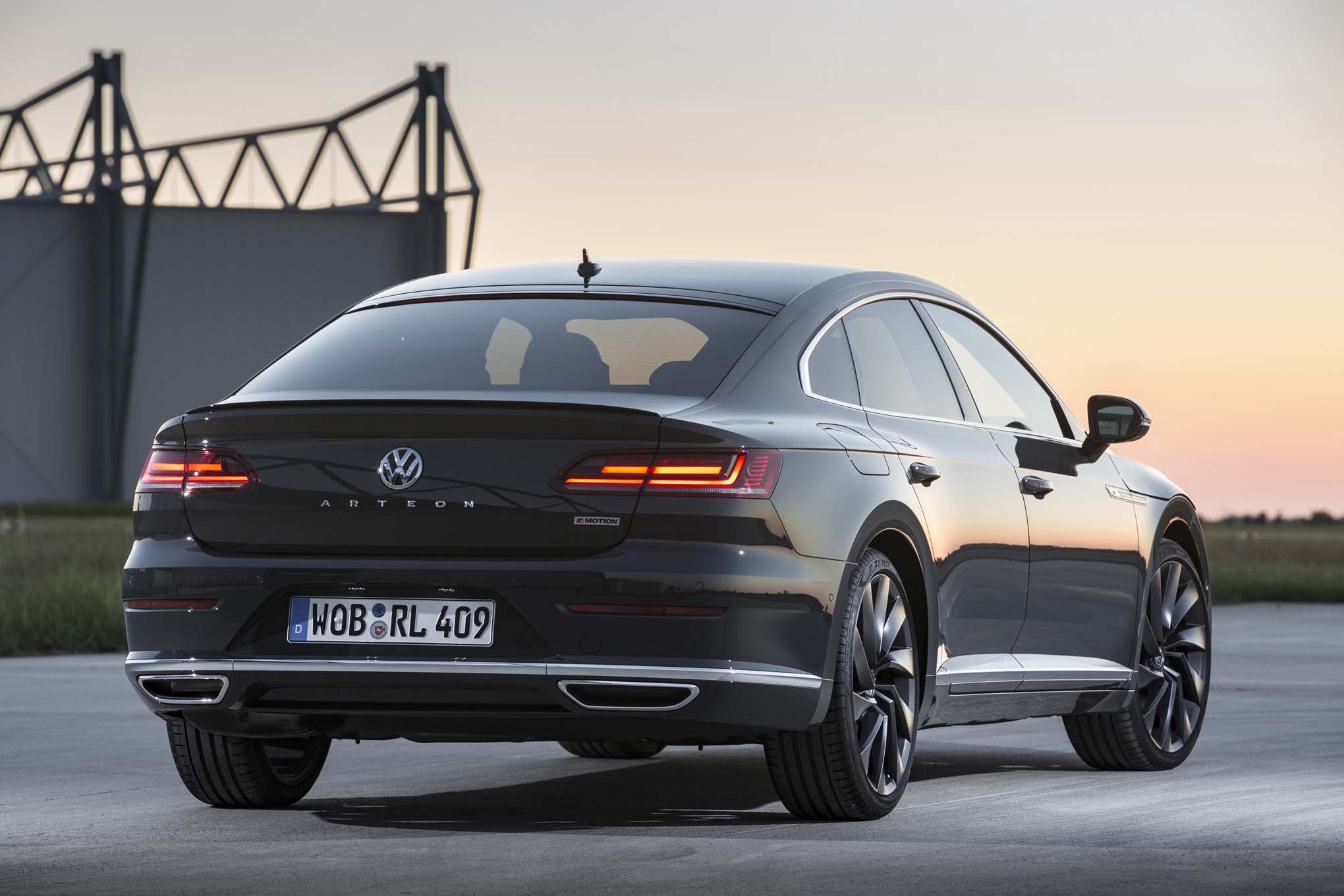 It’s aggressive but just like any Volkswagen, there isn’t a lot going on from the side.  But there’s nothing wrong with that since it’s characteristic of Volkswagen.

Now onto the back, where things are a lot less daring.  I think it’s sharp, but it looks much like a Jetta or something.  It does look pretty executive and sleek, but I’m sure that Volkswagen could do a much better job for their more executive offering.

Overall, the 2018 Volkswagen Arteon is a sharp looking car.  I do like what Volkswagen and I like the fact it is a replacement to the CC.  It’s a good looking thing.

I always have the same issue when talking about the interior for any Volkswagen.  They’re all nice and stylish and modern and intuitive and all those nice adjectives.  But, that’s about it.  Something you kind of nod at and continue on your way.

Again there’s nothing aesthetically wrong with the interiors of Volkswagens, they’re just very…plain.  But that’s what Volkswagen does.

The interior or the Arteon is a nice looking one.  Plenty of wood inlays and big screens like we see a lot these days.

Laid out in Volkswagen’s intelligent style, everything just works.  As usual.

Volkswagen also reworked their air vents on the dashboard here, to a horizontal line that stretches across the entire assembly.  I think it looks great; mainly because of how clean and formal it appears.

They also added in a larger screen inside the Arteon, and it looks more updated compared to the outgoing assembly we’ve had before.

Past that, you’ll notice a lot is unchanged.  Good or bad, the Arteon still looks as Volkswagen as ever on the inside and since the formula works, why change it?

You’ll be able to fit five people inside the 2018 Volkswagen Arteon comfortably.  It’s a stylish and very VW place to sit.

As for the technology front, it’s hard to tell details from this far out from the release.  But, we can see that Volkswagen is implementing their navigation system into the gauge cluster on the dashboard.  I love this system and I think VW did a fantastic job with it, so of course it’s in their “high-end” offering.

Being that we’re a little low on official numbers and stats from the fact that the Arteon won’t be on sale until 2018, hard numbers are hard to nail.

But, we can make some inferences.  Since Volkswagen is such a massive company with such a massive array of offerings they have a lot of options for platforms and engines for their cars.

As of now, we will most likely see a 2.0 L four cylinder turbocharged engine with 268 horse power connected to an eight speed automatic transmission.

It looks like the Arteon will start in the line up as a front wheel drive sedan, but will offer all wheel drive for higher trim levels.

According to Autoblog.com, there will be three gasoline engines and three diesel engines available at launch.

The most popular engine option will be most likely the 2.0 L turbocharged four cylinder engine with up to 276 horse power which should accomplish a zero to sixty in 5.6 seconds. There is also a turbo or twin turbo V6 engine in the works and should be released a while after production begins.

All engines should be connected to a seven speed automatic transmission with dual-clutch set up.

The Arteon will be made more for comfort over sportiness, but will most definitely get the job done.

Volkswagen made mounted the engine transversely, which has a higher center of gravity and again, is less sporty.

According to Autoblog.com, the steering is numb and doesn’t really want to be pushed.  Again, comfort over sport.

The 2018 Volkswagen Arteon is a very sharp looking car and should be a nice and comfy ride.  The CC it’s replacing was more tuned to the sport side of things, and we think it’s because Volkswagen wants to move more Arteon’s off the lot.

People are buying more SUV’s than ever and focusing on comfort in their cars, which is most likely why the Arteon is going to be subtle.  Simply, it sells.

Volkswagen has a high-selling crown in the world right now and any edge they can get on competitors, I’m sure they will take.

Expect the Arteon to be on store shelves in 2018.